This is where YOU come in! On this page you will find an overview of opportunities to participate directly and personally in Berlin’s urban development – be it at information events, in workshops or citizens’ initiatives.

The Berlin Olympic site is many things – a monument and testimony to the Olympic idea, a centre for popular and professional sport, home to Hertha BSC, a place for cultural events and green space, a legacy of National Socialism and one of the most important sports facilities of the 20th century. However, there has been disagreement in Berlin for many years about how the site should be developed. This applies not only to Hertha BSC’s plans to build a football stadium on the site.

Dealing with the complex site presents challenges and opportunities in equal measure. Experts from the fields of monument preservation, architecture, research, politics, sports and administration will talk about the development and utilisation perspectives of this challenging heritage at a digital workshop organised by the Landessportbund entitled “Das Olympiagelände Berlin – Erbe, Nutzung, Vermittlung” (8 June, 10:00-17:00). What are the values of this monument? What goals and formats can be used to convey them? And what perspectives does the site open up? Participation in the workshop is free of charge and possible for everyone without pre-registration.

HERE YOU CAN FIND MORE INFORMATION ABOUT THAT. 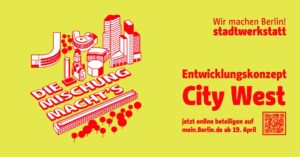 Planning principles for new high-rise projects, guidelines for the urban development of City West and, of course, broad citizen participation – this package comprises the “City West Planning Concept” initiated by the Senate Department for Urban Development and Housing. From 19 April to 19 May, anyone interested can find out more about the ongoing process. 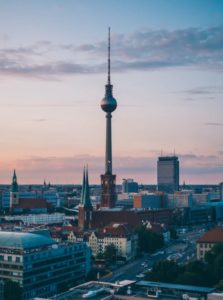 The Rathausforum and Marx-Engels-Forum are to be redesigned. We had already reported on the project of the Senate Department for Urban Development on 15 January. The “Rathausforum development area” comprises the area from the bank of the Spree opposite the Humboldt Forum via the Marx-Engels Forum to the open spaces in front of the Rotes Rathaus and the fountains to the south-east of the TV Tower. The selected works from the first phase of the competition will be exhibited at a public digital event on 22 April from 2 to 10 pm.

In Pankow, between Blankenburg and Heinersdorf, a new urban quarter will be created, the “Blankenburger Süden”. The structure and utilisation concept of the Senate Department for Urban Development and Housing shows how the neighbourhood will be organised. In an intensive working process, different planning teams have discussed and debated many questions. How can the future flats and commercial areas be connected in the best possible way? Where are the green spaces? How many schools and day-care centres are needed? What can a new neighbourhood centre look like and how does the new neighbourhood connect with the existing neighbourhoods? The answers found and the current status of the planning can be viewed by anyone interested until 9 May 2021 – and they can also get actively involved themselves. 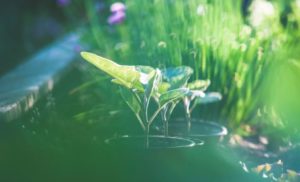 Friedrichshain-Kreuzberg is the most densely populated district in Berlin and consequently has a very large number of sealed surfaces in urban areas. It has been proven that sealed surfaces heat up the environment to a particularly high degree and can therefore also be harmful to health. This circumstance is now to be combated with the project “Unsealing XHAIN”.

The project is the responsibility of the party Bündnis 90/Die Grünen and the association Naturfreunde Berlin. The aim is to make the district greener and to redesign the sealed areas: Enlargement of tree grates, unsealing and greening of car parks, urban gardening, infiltration beds, or water-permeable pavements are just some of the ideas the initiative formulates on its website. Anyone interested in the project can get involved on the initiative’s official website:

The “Initiative Volksentscheid Berlin autofrei” envisages a rededication of public road space over an area of 88 square kilometers. The goal of the initiative is to produce significantly less car traffic within the S-Bahn ring.

The group behind the initiative says it is made up of “passionate cyclists as well as people who like to walk or use Berlin’s well-developed public transport system.” The group also emphasizes its independence from associations, organizations or state funding and presents itself as politically neutral.

HERE YOU CAN SUPPORT THE INITIATIVE.

In the coming years, according to plans of the Senate Department, a modern quarter for science, creativity and exchange is to be created as part of a necessary expansion of the art academy. The name of the new urban quarter will be “Campus Weißensee”. The result of the first planning stage, which has now been completed, is an urban master plan. This plan envisages that the university’s extension buildings and workshops as well as rooms for start-up and research activities, living space for students with studios as well as gastronomy and socio-cultural uses such as a day-care centre will find space around the neighbourhood square. Anyone can participate in the online citizen participation until 31 March.

The district of Lichtenberg is planning the urban development of the undeveloped areas between Wustrower Strasse and Bahnstrasse. The aim is to strengthen the existing district centre. Prerower Platz with the adjacent development forms the district center of Neu-Hohenschönhausen. It has an important supply function for the residents of the large housing estate. It is characterised by its central location and very good public transport connections. It offers important social and cultural attractions with the shopping mall “Linden-Center”, the Anna Seghers library, the AOK health center and the “Cine-Motion” cinema.

The participation takes place within the framework of the preparation of the planned urban and open space planning competition. The insights gained through the participation process are to be incorporated into the competition tender.

Köpenick
Petition: Save the Water sports oasis on the eastern shore of Müggelsee

For many years, the surfing and sailing school has been a widely known place for water sports at Müggelsee. The owners have leased several areas from the city of Berlin for this purpose.

However, the shore property at the heart of the site, which provides access to the open water and the jetties for surfers and sailors, was previously privately owned and has now been sold to a real estate company based in Memmingen. Without the use of this land, the operation of the surfing and sailing school is no longer possible.

The initiative demands that the city of Berlin and/or the district mayor of Treptow-Köpenick, Oliver Igel, intervene and secure access to Müggelsee for the surfing and sailing school and the general public or offer alternative lake access.

The planned and much-discussed reconstruction of the area at Friedrich-Ludwig-Jahnportpark on Schönhauser Allee is attracting the attention of many different interest groups. The group InklusionssportPark für Berlin (Inclusion Sport Park for Berlin) has started an online petition with demands that should be taken into account in the conversion of the area.

This includes the expansion of barrier-free offers and barrier-free sanitary facilities, the creation of a competence center for inclusion sports and other demands. Environmental protection should also be taken into account in the redevelopment of the neighbourhood.

Anyone who would like to see more information on the petition can do so here and register directly online as a supporter.

Berlin
Overview of the public participations

On its official website, the Senate Department for Urban Development and Housing presents an overview of all current online citizen participations.

Here you will find extensive information on urban development projects such as the “Blankenburger Süden” in Pankow, the “Studio 5” project in Treptow-Köpenick or an interactive map of all development plans in Berlin.

The initiative “Wem gehört Berlin” (Who owns Berlin) has set itself the goal of making the Berlin property market more transparent and preserving urban space worth protecting.

That is what the initiative says: “Rents in Berlin are rising and rising. Investors are reaping high profits. Often valuable existing buildings are threatened with demolition. Monuments as well as grey energy and cheap housing are being destroyed unnecessarily. Demands for state-regulated intervention in the market are becoming more radical. But the property market is often opaque. We want to change that and make it more transparent, preserve what is worth protecting and make it sustainably fit for the future. And do this together with you, the residents of Berlin. The more people who participate, the more meaningful the result will be in the end. We want to promote urban development that is oriented towards the common good.”

On the initiative of the district of Charlottenburg-Wilmersdorf, the AG City e.V., the IHK, the VBKI and the “Werkbund”, the WerkStadtForum was launched in September last year with the aim of discussing the needs of the city in a workshop format in dialogue with a diverse group of participants, developing recommendations for action for a necessary mission statement and subsequently deriving concrete implementation recommendations for future projects and interventions.

The WerkStadtForum invites all interested people to participate in the further process and to contribute their thoughts, ideas and opinions for the development of City West.

Hermannplatz is one of Berlin’s best-known squares and is located in the north of the district of Neukölln, on the border with the district of Friedrichshain-Kreuzberg. In the “Urban Development Plan Centres 2030”, Hermannplatz is listed as part of an important main centre. The Senate sees a medium need for action with regard to urban development.

This is what the Hermannplatz dialogue is all about: “A lively place where everyone is welcome – that is the vision for the new project at Hermannplatz. (…) Now the building is to be redesigned and regain its old popularity. Our vision for the new Karstadt building ties in with the cubature and design from the 1920s. Our goal is to take into account the interests and needs of the people of Kreuzberg and Neukölln, but also of the visitors to the neighbourhood, when making the project concrete.”

The Planning Group Stadtkern is an association of experts from various fields who have been professionally involved with Berlin’s Mitte for some time and have been working together since 2011 to advance the goal of reclaiming Berlin’s Mitte.

This is what the initiative itself says:

We draw hope: In recent years, the city centre has been rediscovered through archaeological excavations, publications and in two exhibitions of the Stiftung Stadtmuseum Berlin.

We demand: The centre of Berlin must be returned to the citizens: as participants in the planning, as builders and as users!“

YOU CAN FIND THE INITIATIVE HERE.

Water trees in Berlin, explore the tree population, subscribe to trees or exchange ideas with others. The exciting platform giessdenkiez.de offers you all this and more.

This is what the initiative tells us: “On this platform you can find out about trees in your neighbourhood and their water needs. You can subscribe to individual trees and mark them when you have watered them. Find out about the correct watering of urban trees. If you want to use the site regularly, you should create an account. You can also explore the map without an account.”