On this page you will find all the interviews we have published on URBAN DEVELOPMENT BERLIN. Take a look at our exciting and diverse interviews:

In the fifth episode of our URBAN DEVELOPMENT PODCAST, we spoke with Thomas Willemeit and Oliver Schruoffeneger about the future of the ICC in Berlin’s Charlottenburg district.

The architectural firm Graft is known for its visionary concepts for the future, which not only relate to the architecture of buildings or urban spaces, but also increasingly focus on the topic of mobility in the future.

The office has also created a utilisation concept for the ICC, which has been unused for years. The architects’ group’s idea is to turn the ICC into a Mobility Hub of the future, even in name: The project is entitled “M.ICC”: Mobility Innovation Convention Center. 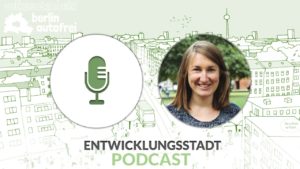 In the fourth episode of our DEVELOPMENT CITY PODCAST, we spoke with Lisa Buchmann. She is an environmental scientist and has lived in Berlin for six years. She is currently a research assistant in the field of integrated transport planning at the TU Berlin.

In addition, Lisa Buchmann has been involved in the “Berlin car-free referendum” since September 2020 and works there in the areas of public relations and strategic issues. We discussed this highly explosive topic with Lisa in detail.

Not only since the successfully completed reconstruction of the Berlin City Castle in the form of the Humboldt Forum has there been discussion about a possible return of the Neptune Fountain to its historical location. In the course of the now upcoming design of the open space in Berlin’s historic centre between St. Mary’s Church, the TV Tower, the Red City Hall and the banks of the Spree on the western edge of the Marx Engels Forum, the topic is now becoming concrete for the first time.

In January we reported on PANDION AG‘s plans to develop the ambitious office and commercial project “Ostkreuz Campus” in the Rudolfkiez district of Friedrichshain. The future 12,400-square-metre campus will consist of three individually designed buildings that will nevertheless form a functional and creative unit: the PANDION ZINC, the PANDION POLLUX and a third building that is currently still in the planning stage.

We had the opportunity to talk to Mathias Gross, Head of PANDION’s Berlin branch, about the project.

In the third episode of our URBAN DEVELOPMENT PODCAST, we spoke with Dipl.-Ing. Peter Deluse. He is an architect and founder of the Berlin-based firm Deluse Architects.

This episode of our podcast series focused on the topic of housing construction in the ever-growing metropolis of Berlin. Some time ago, Peter Deluse surprised the city’s urban planners and building committees with a completely new, innovative proposal: namely, the idea of building residential buildings over existing rainwater retention basins.

GO TO THE PODCAST HERE.

28 January 2021
Dr. Michael Steinke as a guest on the
Urban Development Podcast

In the second episode of our URBAN DEVELOPMENT PODCAST we spoke with Dr.-Ing. Michael Steinke. He is a partner in the urban planning office: Stadt (City) | Ökonomie (Economy| Recht (Law).

The company, which is based in Erfurt and Berlin, plans for both public and private clients and, in particular, draws up development plans and development concepts.

Jan Kleihues is one of the architects who decisively shaped the image of post-reunification Berlin. His best-known work is the new building for the Federal Intelligence Service in Berlin-Mitte. This project had a total cost of over one billion euros and is still the largest construction project of the Federal Government. Other well-known works by the architectural firm Kleihues + Kleihues in Berlin are the “Dorint Hotel” on Kurfürstendamm (formerly “Hotel Concorde”) and the Maritim Hotel on Stauffenbergstraße. Another project is currently in the planning stage: the “Upbeat Berlin” is being built at Nordhafen according to plans by Kleihues + Kleihues.

We had the pleasure of talking to Jan Kleihues, founder of the architecture firm Kleihues + Kleihues, about the “Upbeat” building project and other projects in Berlin.

10. December 2020
Axel Diehlmann as a guest on the Urban Development Podcast

On 9 October 2020, the apartment building at Liebigstraße 34 in Friedrichshain was vacated. All residents of the building and members of the left-alternative project “anarcha-queer-feminist house project Liebig 34” had to leave the building as a result of the eviction. Around the day of the eviction, there had been a variety of media coverage and, of course, a lot of unrest in the district itself. The action was accompanied by days of preparation and follow-up by the police and protest groups.

In the first episode of the URBAN DEVELOPMENT PODCAST, I spoke with Axel Diehlmann, himself a native of Friedrichshain, about why the situation in the Friedrichshain district is so complex, what mistakes were made in the past and what the future of this district, which is as popular as it is polarising, can look like with its important, socially oriented social projects.

GO TO THE PODCAST HERE.

7 December 2020
The Future of Work: André Marx about the Axel Springer New Building

What cannot be taken for granted in Berlin has been achieved by the media group Axel Springer SE with its new building on Zimmerstraße designed by Rem Koolhaas: The budget and time frame of the project were adhered, and the move-in of the approximately 3,500 employees has been carried out successively since spring 2020.

Rem Koolhaas’ expansive building, which gives completely different visual impressions on all four sides, is already one of the most photographed buildings in the area around Rudi-Dutschke- and Axel-Springer-Strasse, which is traditionally characterised by commercial and office buildings and is of course home to many media companies.

We had the opportunity to talk to André Marx, Programme Manager “Axel Springer New Building”, about the project and the first experiences of everyday working life in the new office building.

HERE YOU CAN GO TO THE INTERVIEW WITH ANDRÉ MARX.

Six months after the opening of BER airport in Schönefeld, Tegel airport will finally be closed. According to current plans, the airport site in the north of Berlin will become one of the largest urban development projects since reunification in May 2021. In the following years, a research and industrial park for urban technologies as well as a new residential district will be built on the site. In addition, a landscape area of about 200 hectares will be created.

We had the opportunity to talk to Constanze Döll, press spokesperson for Tegel Projekt GmbH, about the very concrete implementation of this visionary as well as large-scale urban development project.

6 November 2020
Opening of the Humboldt Forums:
Michael Mathis in Conversation

The opening of the Humboldt Forum is one of three major projects – along with the opening of the BER and the extension of the U5 – that are due at the end of this year and are generating a great deal of attention beyond Berlin’s borders.

Michael Mathis, the foundation’s press spokesman, told us in an interview how exactly the partial opening of the Humboldt Forum will take place, what plans and visitor concepts are in place and how the responsible “Humboldt Forum Foundation in the Berlin Palace” is dealing with the current Corona situation.

The discussion about a possible new football stadium for the Berlin Bundesliga club Hertha BSC has been dragging on for several years. However, there has been little real success for Hertha BSC’s project so far.

An initiative founded by Hertha fans from Berlin and Brandenburg has been trying for over a year to raise awareness of the issue among decision-makers in Berlin politics and to facilitate a dialogue.

We talked to the Blue-White Stadium Initiative, as its official name is, about its goals and the status of its activities.

CLICK HERE FOR THE INTERVIEW WITH THE  “BLUE-WHITE STADIUM” INITIATIVE.

Oliver Schruoffeneger, born in Berlin in 1962, has been District Councillor for Urban Development, Building and the Environment in the Charlottenburg-Wilmersdorf district since November 2016.

He has been a member of the Bündnis 90/Die Grünen party since 1978. We had the pleasure of talking to Oliver Schruoffeneger about his work as District Councillor for Urban Development, Building and the Environment.

4 September 2020
Roland Stolte on the planned “House of One”

At Petriplatz, in the historic centre of Berlin, one of the most innovative and ambitious projects in Europe, perhaps even the world, is being built. Called the “House of One”, the building is to be built on the medieval site where Berlin was founded.

The “House of One” is to be the first sacred building in which Jews, Christians and Muslims can practise their religion together under one roof.

We had the opportunity to talk to Roland Stolte about the upcoming project. Stolte is Chairman of the Administrative Board, Head of Content and Concept.

Back in February of this year, we reported on the future use of the site where the Anhalter Bahnhof, which was heavily damaged in the war and demolished in the 1960s, once stood. According to current plans, however, there will be no reconstruction of the historic building on this site, but rather the new construction of an exile museum that has been planned for several years.

We had the opportunity to interview Meike-Marie Thiele. She is the managing director of the Exilmuseum Berlin Foundation and has been working for the project since January 2019.

You can find an overview of all published topics on the HOMEPAGE.

You know someone we should definitely interview? Then feel free to contact us and make a suggestion. Just send us an email.