Last year, Friedrichstraße in Berlin-Mitte was mainly represented in the regional and national media by the pilot project car-free Friedrichstraße. However, the streetscape is currently changing not only in the car-free area of the street (between Unter den Linden and Leipziger Straße), but also at its northern end.

This is where part of the large-scale project “Am Tacheles” is growing, which is being realised according to plans by the renowned architectural firm Herzog de Meuron. The height of the building and the advanced façade design make it very clear how much the new building will change and redefine the urban space at this location.

AM TACHELES” PROJECT BEING BUILT AT THE NORTHERN END OF FRIEDRICHSTRASSE

For several years now, a completely new quarter has been taking shape on the huge construction site around the former artists’ house “Tacheles”. The Swedish photo gallery Fotografiska is to move into the modernised department stores’ ruin. Two other houses, also listed buildings, which stand directly on Friedrichstraße, will be preserved.

Around them, new construction is taking place, and on a grand scale: ten new buildings are being erected on the area between Oranienburger, Friedrich and Johannisstraße. And anyone who visits the construction site regularly quickly notices: work is being done here at high speed to complete the project.

Here the façade design will be strongly dominated by glass as a building material, which is already clearly visible. From Friedrichstrasse, a previously non-existent passageway will be created to Oranienburger Strasse, which will offer space for gastronomy, retail and a city square. 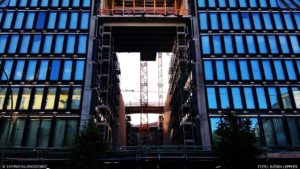 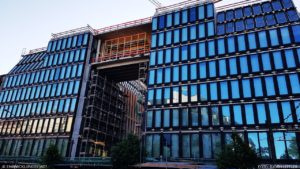 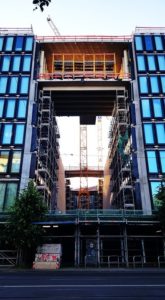 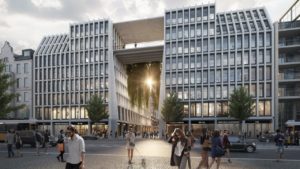 The future: this is what the design of the buildings on Friedrichstrasse will look like once construction work is complete. / © Graphic: bloomimages / Herzog de Meuron 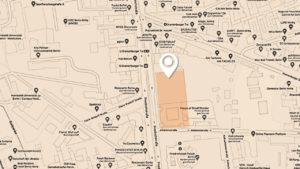