Anyone passing by the Humboldt Forum in Berlin’s historic and cultural centre yesterday, Wednesday, might have rubbed their eyes in surprise: without much press announcement, the unroofed inner courtyards of the palace reconstruction were opened to the public.

Since word had apparently not really got around by yesterday afternoon, only a few hundred visitors took advantage of the opportunity to personally examine the now finished interior areas of the future museum building.

Opening up the unroofed inner courtyards

Both now accessible, unroofed inner courtyards are connected by a passageway. The third courtyard, the so-called foyer, will only be opened to visitors to the museum in the course of the year.

In the Schlüterhof as well as in the passage, there are already culinary offerings for guests. A bistro and a restaurant with outdoor seating invite visitors to linger. And the first museum shop has already opened.

The courtyards that are now open to the public are the Schlossforum – a passage connecting the Lustgarten with the Schlossplatz across the building – and the magnificent Schlüterhof. A variety of events will take place here in the future.

Three reconstructed façades will be complemented by a modern façade design in the Schlüterhof. In the Schlossforum passage, architect Renzo Piano has opted for a predominantly modern design of the wall cladding; only the entrance and exit portals are based on the historical models.

Plenty of space for future events

So within the new Berlin Palace there are now three courtyards, all designed as so-called “theatre piazzas”. The third, roofed courtyard will function as the future, central entrance area to the museum areas. Spatially, it relates strongly to the reconstructed, former Eosander portal.

The creation of these three inner courtyards creates considerable, public spaces within the building and thus consistently implements the concept of an “open castle”. These open spaces also enabled the project planners to recreate the passageways and courtyard sides of all five palace portals. 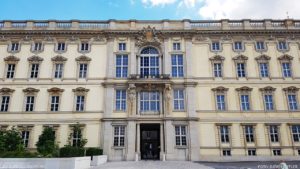 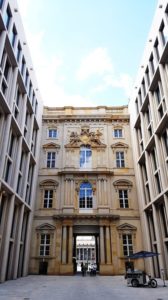 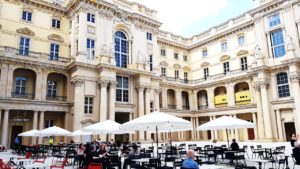 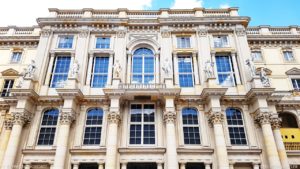 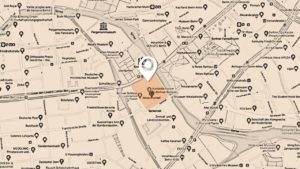