Lack of space in the Bundestag: New offices to be built in timber construction

The fact that space is at a premium for the parliamentarians of the German Bundestag and their federal ministries and institutions has not only been known since the widely discussed expansion of the Federal Chancellery.

But it is not only the Federal Government’s building, to which the Federal Chancellery belongs in purely structural terms, that will be expanded in the coming years. Somewhat less pompous is a new office building project that is growing in the shadow of the Federal Press Agency and the Marie-Elisabeth-Lüders-Haus.

While the Chancellery extension is currently the subject of elaborate planning and is scheduled for completion in six years at the earliest, the project on the western “Luisenblock” is being pushed ahead with great vigour.

The timetable is ambitious: the offices are to be ready for occupancy after the Bundestag elections in September 2021. For this purpose, the new offices are being built in modular timber construction in order to be able to apply a fast and also climate-friendly construction concept.

Offices to be ready for occupancy after the federal elections

The office buildings now being constructed are not designed “for eternity”, but for a maximum useful life of around 15 years. 400 offices will be built on the site on the curved Margarte-Steffin-Strasse.

Why the offices are being built in modular construction is obvious. The advantages lie in a high degree of prefabrication and the resulting shorter project times. This means that short-term needs can be met, as in this case.

Until the end of the 1990s, several prefabricated buildings from the GDR era stood on the site. In terms of urban planning, the design by Sauerbruch & Hutton takes up the height and cubature of the Marie-Elisabeth-Lüders-Haus opposite and thus integrates it into its surroundings. At the same time, the future coloured design of the façade panels is intended to create an independent building character. 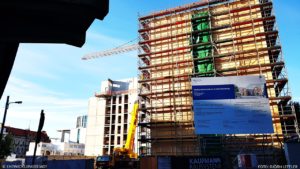 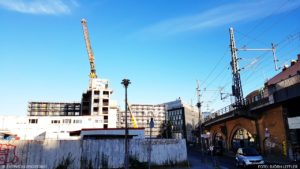 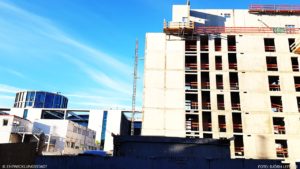 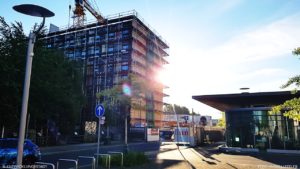 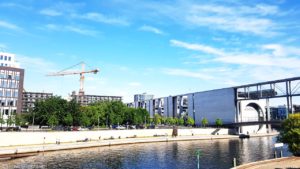 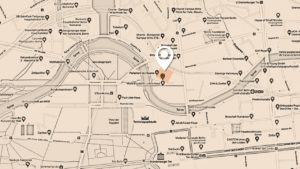