As we reported on 7 October 2020, a privately financed youth welfare house is currently being built in the immediate vicinity of the monastery ruins on Littenstraße. The future building has now reached its full height.

The youth welfare house of the “Emmi Luebeskind” Foundation is not only surrounded by the ruins of the monastery, but also by other listed buildings located in and around Littenstraße in the Mitte district.

The project is surrounded by numerous historic buildings

Above all, the building of the former district and local court (today: Berlin District Court), which stands on the corner of Grunerstrasse and was built between 1896 and 1905 in a mixture of neo-baroque, art nouveau and gothic styles, dominates the area from an architectural point of view. It was once the second largest building in the city, surpassed only by the City Palace.

Due to the surrounding historic buildings, a historicising surface was chosen for the building’s façade design so that the building would blend harmoniously into its surroundings.

Criticism of the project came from the State Monuments Office

In the new house there will be rooms for counselling and employment, and in the tower several residential communities for young people. The foundation is developing the building entirely on its own private initiative and is constructing it without public funding.

Counselling rooms and residential communities for youth welfare are being built

It is not the first new building to be constructed in this environment that attempts to pick up on historical conditions. In the immediate vicinity of the Parochial Church, the “Klostergärten” housing project has been realised and forms a well-functioning symbiosis of existing and new building structures.

Another project dealing with the redesign of Berlin’s historic old town is the reconstruction of Molkenmarkt. This is a long-term project. Experts expect the project to take about 20 years.

YOU CAN FIND MORE PROJECTS IN MITTE HERE. 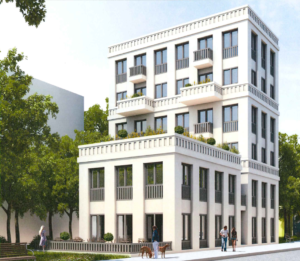 Historicising façades: This is what the future building will look like 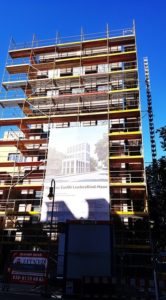 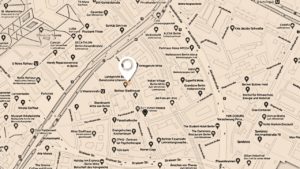