Conference in October: Future of the Olympic Park to be discussed

During this public workshop format, which lasted about eight hours, the difficult history of the site, a suitable way of dealing with it, its current condition and a possible, sustainable utilisation concept for the coming years and decades were discussed.

Wanted: A viable utilisation concept for the Olympic Park

The plans of the Berlin Bundesliga club Hertha BSC were also discussed. The club is planning to build a football-only stadium on the grounds of the Olympic Park. The debate about this, which has been going on for five years, has so far remained inconclusive.

This and other topics are now to be dealt with in more detail at an expert forum in October this year. All the institutions and users involved are to take part in the planned conference, i.e. representatives of the state-owned Olympiastadion GmbH and the Berlin Senate, but also historians, preservationists and the Landessportbund Berlin. On the initiative of the latter, the workshop is currently being planned for October.

In addition to the event held on 8 June, another basis for the conference planned for October is a study by the Institute of Contemporary History (IfZ), which calls for a critical approach to the relics of the Nazi era located on the grounds of the Olympic Park. This concerns, among other things, the naming of streets and buildings, but also the sculptures and statues scattered around the area.

For the Olympic Games held in Berlin in 1936, the area called “Reichssportfeld” in the Westend district was newly created in its present form. The existing “German Stadium” on this site was largely demolished and replaced by the Olympic Stadium, while the Sports Forum, which had already been laid out at the end of the 1920s, was supplemented by further buildings.

The “Reichssportfeld” was built by 1936 according to plans by Werner March.

The architect of the site was Werner March. In planning the grounds, he closely followed the planning policies of the National Socialists and Adolf Hitler. This gave the site its ideologically dominated character, much of which is still preserved today.

In addition to the Olympic Stadium, the Reichssportfeld also included the German Sports Forum, the Olympic Swimming Stadium, the Waldbühne, the Maifeld, the Glockenturm with Langemarckhalle, the Hockey Stadium, the Equestrian Stadium and the stadium terraces.

Professor Dr Magnus Brechtken, director of the IfZ, comments on the study as follows: “All these buildings from the Third Reich are an attempt to shape racial ideology in stone.” Brechtken’s goal is to start a new, objective discussion about what is worth preserving from today’s perspective or what things should possibly be changed.

Opening the area to the public and possible Olympic bid 2036

The comprehensive opening of the area to the public will also be a topic of the event in October. In addition, there is another topic that has been constantly in the media for over a year and flares up again and again: A possible bid by Berlin for the 2036 Summer Olympic Games.

Particularly against this background, Thomas Härtel, President of the Landessportbund Berlin, is calling for changes to be made to the site to avoid the impression that such a bid could be seen as an anniversary celebration of the 1936 Games, which were misused by the National Socialists as a propaganda spectacle.

The Landessportbund demands changes on the site

Härtel also says that he can certainly understand Hertha BSC’s desire for a new, football-only stadium on the site and that it should also be discussed intensively.

Oliver Schruoffeneger, district councillor for urban development in the Charlottenburg-Wilmersdorf district, expressly welcomes the initiative: “It’s good that the discussion is starting. I’m looking forward to having a concept for the diverse use as a sports and leisure area as well as a historical memorial and educational site in about four years.”

So there is movement on the topic of the Olympic Park. It is clear from the outset that the future of the site and a suitable way of dealing with its historical burden is certainly one of the most complex issues to be discussed by the capital’s historians and urban planners. At the same time, however, it is also one of the most exciting topics of the ambitious sports city of Berlin.

Because the unique site in the west of Berlin is, even in international comparison, a sports area with extraordinarily great potential. It remains to be seen whether it will be possible to exploit this potential and put together a viable utilisation concept and implement the diverse demands that are placed on the site. What is important, however, is that there is a political will to change the status quo.

You can find more projects here. 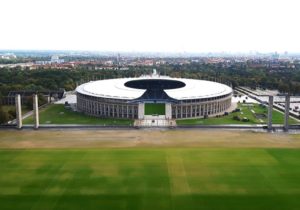 The heart of the Olympiapark Berlin: the Olympic Stadium, modernised from 2000 to 2004

What is the right way to deal with the legacy of Nazi architecture? Picture of the historic fire bowl from the 1936 Summer Olympics, which still stands in the listed arena. 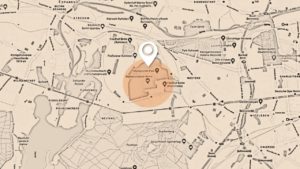