For both – historically correct reconstruction or a new building with a modern interpretation – are possible on the site where the historic building was erected between 1832 and 1836 according to plans by Karl Friedrich Schinkel. After years of debate, it has now been decided that the building, which was badly damaged by bombing on 3 February, is to be rebuilt, and the Bundestag has provided the necessary start-up funding.

Reconstruction has been decided by the Bundestag and financially supported

Nevertheless, the road to reconstruction has been and still is an extraordinarily rocky one. Above all, the wrangling over the appointment of the founding director had put the project under severe time and content constraints last year.

After the first choice of the search committee, Florian Pronold, was rejected by experts and architects and he ultimately resigned from his post, the post was filled anew in March 2021.

New appointment to the post of founding director: Guido Spars takes over

Wuppertal architecture professor Guido Spars is now to establish the Federal Foundation as its founding director. However, he will not take up his post until September of this year. Until then, however, the project will by no means rest. Intensive archaeological excavation work is currently underway on the historic grounds of the Bauakademie.

During the excavations, numerous decorative parts of the former façade, parts of window mullions, moulded tiles and further fragments of terracotta reliefs have been discovered in recent months. Students of the postgraduate course in Building Research and Monument Preservation at the Technical University of Berlin are involved in the excavation and research work.

At present, it has not yet been decided in what form and with what function the cuboid building will be rebuilt. The currently active archaeologists propose to prominently display the extensive finds in the future building and to leave the foundations of the former building visible.

After its completion, the building was considered revolutionary for the 19th century in its construction method. According to Hermann Parzinger, President of the Prussian Cultural Heritage Foundation, it was “the first authoritative secular rough brick building in Prussia“.

The building was considered revolutionary in the 19th century

The building’s column grid had eight axes in each direction with a spacing of 5.55 metres, thus providing a mathematically exact structure. The red, unrendered brick facing contained elaborately designed decorative terracottas. Schinkel himself lived in a 600-square-metre flat in the building.

Despite the destruction during the Second World War, the building was to be rebuilt in the GDR. The architect Richard Paulick had drawn up a restoration and reconstruction plan, and a topping-out ceremony was even held in 1953. In the following years, however, the project faltered; the SED government no longer wanted to release financial resources for the project.

The DDR first planned to rebuild, but demolished the remains in 1962

As a result of the DDR’s ideas competition for the “socialist transformation of the city centre“, which was announced in 1958, the Bauakademie was demolished on 13 March 1962 in accordance with the decision of the management collective for the development of the city centre, in order to make room for the construction of the Ministry of Foreign Affairs of the DDR in 1966.

After its founding director took office, however, the newly founded Bauakademie would first have to find and position itself in terms of content before details of the new building could even be discussed. In addition, a building programme will have to be developed and an architectural competition launched to house the institution in the rebuilt Schinkel building.

An architectural competition for the reconstruction is launched

What the future tasks of the Bauakademie will be and how it will distinguish itself from the similarly positioned Bundesstiftung Baukultur will be explored from autumn 2021. A merger of these two institutions, including accommodation in the Schinkel Reconstruction, is also being discussed again and again.

Due to the numerous variables and imponderables that currently accompany the project, the future shape of the building is still completely open. Supporters of the historical form, such as the Förderverein Bauakademie, are calling for the reconstruction in its correct, historical dimensions and features.

“Förderverein Bauakademie” calls for reconstruction true to the original

But, as the reconstruction of the Humboldt Forum has shown, completely different, more modern approaches can also be incorporated into the concept. This depends on the composition of the jury that ultimately decides and, of course, above all on how the building is to be used in the future.

On the one hand, the example of the Humboldt Forum has shown that even a long, rocky road can ultimately be successfully negotiated. But it is also an example of how it can be a hindrance to the overall project if the building is ultimately supposed to do “too much” and a very large number of compromises have to be made. It remains to be seen whether the “Reconstruction of the Bauakademie” project will be able to profit from these experiences.

Model of the historic Bauakademie 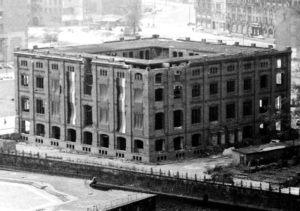 Relatively well preserved: A photograph of the Bauakademie from the 1950s. Nevertheless, the building was demolished in 1962. 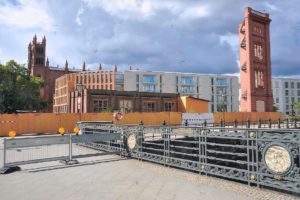 Status quo: This is how the site presents itself today. 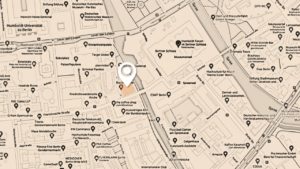