“Alexander Tower” in Mitte: Building construction will start at the end of the year

Several high-rise projects are currently being developed or planned at Alexanderplatz. The Signa Group is planning to start construction in summer on a 134-metre-high building that will be structurally integrated into the existing Kaufhof.

Directly next to the Park Inn Hotel, the first civil engineering work is already underway for the 130-metre-high residential and office building planned by the Covivio Group. However, the furthest along is the “Alexander Tower” project (formerly “Monarch Tower”), which is being realised directly next to the “Alexa” shopping centre.

With a height of 150 metres, the building will be by far the largest building on the square, surpassed only by the neighbouring television tower (368 metres high). It will also be the tallest residential building in the capital. The real estate company Bewocon is responsible for the project.

To be able to reach the height in the difficult Berlin subsoil, some engineering skill is required. 43 reinforced concrete piles will be driven around 40 metres into the ground. The floor slab of the building will have an immense thickness of almost four metres. It will rest on the bored piles so that the weight of the tower can be transferred into the ground.

In fact, the building will weigh a total of around 100,000 tonnes when it is completed. Structural engineering for the building is scheduled to begin at the end of 2021. The project is scheduled for completion by 2023. The future main entrance and foyer will be located on Alexanderstraße. According to current plans, the façade will contain elements made of fibreglass concrete, metal and glass.

Completion is planned for 2023

So while Signa, Covivio and Bewocon are getting their projects off the ground, the status is unknown for the Hines high-rise. Another 150-metre high-rise is to be built in the immediate vicinity of the “Alexa”, directly adjacent to the Saturn base building on Alexanderplatz.

Back in December 2019, it was said that the lead US company Hines and the BVG supervisory board had agreed on the technical feasibility of the project after years of dispute. However, information about a possible start of construction has not been available so far.

From a height of about 30 metres, the construction of about 300 flats is intended. On the lower floors, uses such as retail, a hotel or services are planned. 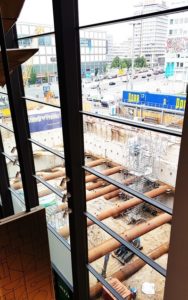 Current status of the construction work: Civil engineering is in full swing, from the end of 2021 the heights will be reached 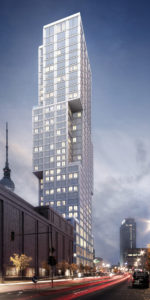 The future: This is what the finished building will look like from 2023 onwards 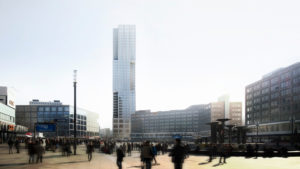 View of the “Alexander Tower” from Alexanderplatz 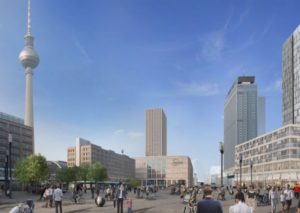 Neighbouring project 1: The planned high-rise building of the Signa Group at Kaufhof 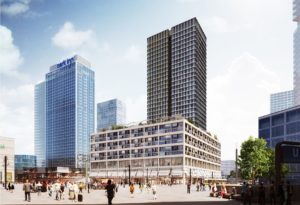 Neighbouring project 2: The Covivio Group is planning a 130-metre-high building next to the Park Inn Hotel 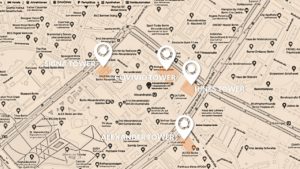