Something was brewing in March 1957, at least in the western part of Berlin. The media of the frontline city, still badly scarred by the consequences of the World War, ran angry headlines: “Berlin’s garden gnome” or “concrete block” were the terms they used to describe architect Egon Eiermann’s design for the reconstruction of the Memorial Church on Breitscheidplatz.

What had happened? According to the plans of the architect, who was born in 1904 in Neuendorf (near Potsdam), the reconstruction was to mean a complete demolition of the still standing ruins of the main tower and a functional new building on the same site.

Eiermann was the winner of an architectural competition held in 1956 to redesign the square. It was not clear from the outset that the memorial church would remain on this square at all.

The Kaiser Wilhelm Memorial Church was built from 1891 to 1895 according to plans by the architect Franz Schwechten, who had also designed the Anhalter Bahnhof in Berlin. In the course of the project planning, at the suggestion of Kaiser Wilhelm II, a memorial in honour of Wilhelm I was brought into play, which was later realised. This is where the name of the church, which is still valid today, comes from.

But already in the 1920s, the building, which was not without controversy, was a thorn in the side of the city planners. There was public discussion about demolishing the church because it stood in the way of traffic planning at the entrance to Kurfürstendamm. In addition, the island including the church was considered an old-fashioned blockade of the new era. In the end, however, these efforts did not succeed.

Demolition of the church was already being considered in the 1920s

After the church was severely damaged in the Second World War during the night of the bombing from 22 to 23 November 1943, the nave and choir, which were in danger of collapsing, had to be completely demolished after 1945. Only the ruins of the tower remained. However, the Allies did not support the reconstruction of the Wilhelminian church.

Thus, at the end of the 1950s, the church was doomed for a second time, for the planners of the new, (car-friendly) West Berlin still regarded the ruins as a traffic barrier. In the meantime, they even considered moving the new church to Schaperstraße in Wilmersdorf, where it would not disturb the flow of traffic on Tauentzien and Kurfürstendamm.

Werner March proposed a reconstruction of the historic church building

The church management, however, held on to the original site under hereditary building law and surprised the public in 1954 with a design by Werner March, who had once helped plan the Reichssportfeld, completed in 1936. His design for the memorial church envisaged retaining the main tower and a simple hall as the nave.

However, the design could not be implemented because the modern architectural world regarded the remnants of Prussian-dominated building eras as trouble spots in the new city to be planned, which led, among other things, to the demolition of the Anhalter Bahnhof in Kreuzberg or the removal of the remaining parts of Berlin’s old town on the East Berlin side.

A new building was needed: the historic tower was threatened with demolition

And so a new building was also to be erected on this site. The specifications for the architectural competition were clear: in future, the tower was to stand to the east of the nave (no longer to the west), so that the church could be connected to a forecourt facing Kurfürstendamm without any crossroads or traffic.

However, Eiermann’s design, which was awarded 1st prize by the jury, horrified the people of West Berlin as well as the journalists: the old tower was gone. Instead, a functional, much smaller campanile made of glass and concrete was to replace the historic structure.

The result was a press campaign (“Save the Tower”), reader votes (with over 90% of the participants in favour of preserving the tower), street protests and even a banner on the ruins (“Noli me tangere” – “Don’t touch me“).

Surprised by the heated debate, the jury asked the winning architect Egon Eiermann to revise his design, which he reluctantly did.

Revision of the design: The present face of the Memorial Church

This led to the realisation of the now well-known Memorial Church with its still 71-metre-high historic main tower and the complementary modern buildings.

At first, neither the architect nor the people were really happy with this realisation. The new Memorial Church was inaugurated shortly before Christmas 1961, when Egon Eiermann found conciliatory words: “My new church could stand in any city, but combined with the ruined tower it is a unique building, only possible in Berlin.”

The theme comes from the exciting book “Luftschlösser – Berlins unvollendete Bauten” by Andreas Hoffmann. Other unfinished projects are listed in this work.

The book, which is now out of print, can still be purchased second-hand here. 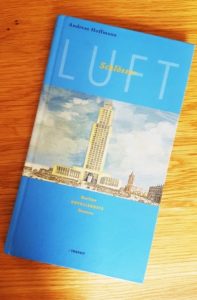 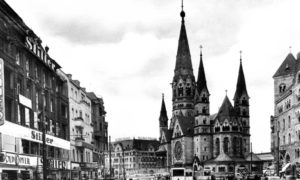 The historic Kaiser Wilhelm Memorial Church. The photo was taken at the beginning of the 20th century.

Destruction: In November 1943, large parts of the church were destroyed by Allied bombs. 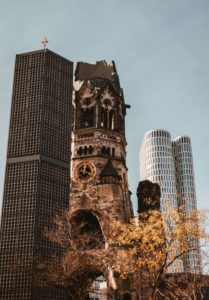 The Memorial Church (“Gedächtniskirche”) today, with modern and historical elements.