Senate plans 700 flats on the former radio factory in Köpenick

On the former Funkwerk Köpenick site, 700 apartments, daycare and elementary school places as well as a public riverside path along the Dahme are to be built. At a meeting on May 18, the red-red-green senate decided to submit the corresponding development plan to the Berlin House of Representatives for approval.

On the eight-hectare site of the former radio plant on Wendeschloßstrasse, the planning conditions are to be created for the development of a new residential site with additional commercial and social facilities as well as public green spaces.

700 APARTMENTS ON AN EIGHT-HECTARE SITE

25 percent of the new apartments are to be designed as subsidized housing. This is according to the plans of the Senate Department for Urban Development. The planned, public green areas are to be built between Dahme and Wendenschloßstraße.

The realization of the area development will be carried out according to the specifications of the so-called “Berlin Model” of cooperative building land development, so that the necessary daycare and elementary school places will also be created in order to be able to guarantee short and low-emission routes for the future residents.

Currently, large areas of the site lie fallow and are not accessible to the public. It is planned to loosen up the development structure towards the Dahme riverbank area in order to make the area ideally usable for the residents but also for the public. The more commercially used areas are to be concentrated along Wendenschloßstrasse.

The area is historically quite significant. The so-called “VEB Funkwerk Köpenick” was a state-owned enterprise (VEB) based in East Berlin and one of the most important facilities for communications electronics in the former GDR. More than 3,000 people were employed at the main plant in Köpenick’s Wendenschloßstrasse 142-170.

However, production at the site was discontinued in 2004. At that time, about 100 employees were still working there. The large administration building along Wendenschloßstrasse (main entrance number 160) has been empty ever since, and many other former production halls have been demolished.

It is not yet known whether the existing building will be included in the design of the future residential and commercial area, as is the case with the Garteninsel project in Spandau. 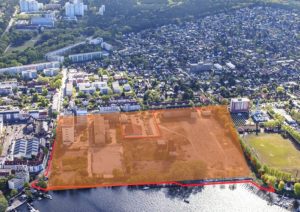 Overview of the area to be developed. The riverside path along the Dahme is to be made usable for the public.

Attractive district in the south-east of Berlin and increasingly sought-after residential location: Köpenick