“Motorworld”: A large event and commercial area is being built in Spandau

In recent weeks, we have reported on the numerous car-free projects planned by the Berlin Senate as well as on citizens’ initiatives for a car-free Berlin city center.

In Spandau, however, a project is currently being implemented that has a completely different focus: Here, motorized mobility is clearly at the center of the project. The “Motorworld Manufaktur Berlin” is being built on a former industrial site not far from the Spandau Citadel.

EVENT LOCATION WITH A CONNECTION TO MOTORIZATION: “MOTORWORLD MANUFAKTUR”

The site is located directly next to the BMW motorcycle factory in the Spandau district, close to the busy, multi-lane traffic artery “Am Juliusturm”. The internationally operating Motorworld Group, headquartered in Kemptthal, Switzerland, plans to build a hotel, event and business park here. The company maintains several such sites in German-speaking countries.

Motorized vehicles have been built on the site since the early 1920s. Until 2002, the historic buildings were still used for antenna production, among other things. In the meantime, however, there are no longer any significant production facilities on the site. But, as mentioned above, the BMW company produces models for its motorcycle division in the immediate vicinity.

VEHICLE PRODUCTION HAS A LONG TRADITION AT THE SITE

Motorization therefore has a long tradition here, and it is not without reason that numerous other car manufacturers and service providers are present at this site, such as Lamborghini, Nissan and Toyota.

The long-term project has already been underway for several years. The existing historic buildings will be integrated into the future site. Some of them have already been completed, such as the so-called “Alte Härterei” with its characteristic shed roof. Companies such as Aston Martin and Lamborghini have already set up workshops and showrooms in the building in 2019.

INTEGRATION OF HISTORIC INDUSTRIAL HALLS INTO THE FUTURE SITE

And this is also the concept that Motorworld is pursuing with the project. Trading areas, workshops, showrooms, simulators, offices or even studio space can be set up on the newly emerging site.

A multi-story parking garage with glass parking boxes will also be built on the site. The largest event location will be the so-called “Zweitakthalle”, one of the historic buildings on the site. In the future, events for 1,800 people indoors and up to 2,500 people outdoors will be able to take place here.

But it is not only the existing, historic buildings that are to enhance the site. The new buildings will also set unusual visual accents. The highlight of the site is the hotel concept. This envisages accommodating the hotel rooms in 40-foot-long “highcubes” – i.e. former shipping containers.

This architectural concept fits in with the once industrial character of the site, which is to be spatially grouped around an open area called the “marketplace”. In the future, this area will be used for vehicle presentations and also for events.

Construction is already underway: In addition to the “Alte Härterei” (old hardening shop), which was already completed in 2019, four further buildings will be erected on the site by September 2021. By mid-2023, the areas for gastronomy, the aforementioned parking garage and the “Zweitakthalle” should be ready for occupancy.

So things are happening in Spandau. In the future, it will not only be worth a trip to the historic citadel, but also a visit to the neighboring “Motorworld Manufaktur. From 2023 at the latest, Berlin’s real estate market will be enriched by another exciting event location. 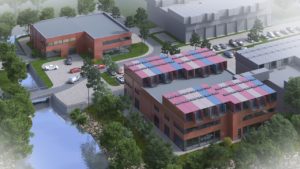 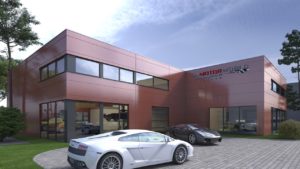 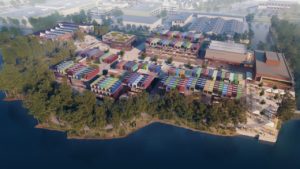 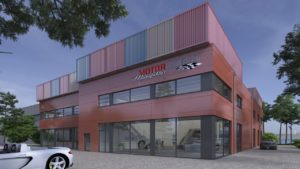 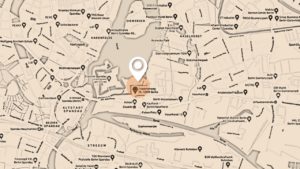