The discussion about a possible new soccer stadium for the Berlin soccer Bundesliga club Hertha BSC has been dragging on for several years. However, there have been few really noteworthy successes for Hertha BSC’s project so far.

An initiative founded by Hertha fans from Berlin and Brandenburg has been trying for over a year to sensitize decision-makers in Berlin’s political arena to the issue and to facilitate a dialogue.

We once talked to the Blue and White Stadium Initiative, as its official name is, about the goals and status of its activities.

URBAN DEVELOPMENT: First of all, thank you for taking the time to present your initiative to us. What do you want to achieve in concrete terms?

Blue and White Stadium Initiative: The minimum goal of our initiative was and is to intensify talks between Berlin’s political leaders – the Senate and the district of Charlottenburg – and Hertha BSC. We want to talk to each other on the subject of “A stadium of our own for Hertha BSC” and not, as so often in the past, about each other. This is already what we want to achieve: a stadium of our own for our club within the city limits of Berlin – preferably on the Olympic grounds (“Olympiapark”).

What is the composition of your group? How big is your movement? And: Is it possible to participate?

We are all Hertha fans from Berlin and Brandenburg. We regularly go to the home games; some of us are also going to the away games. The group is intentionally not only made up of people who have been passionate about their own stadium right from the start. It was important for us to have the arguments of the Olympic stadium supporters and undecided people in the group from the very beginning. But it was important for us to embody, if not all of them, then at least a large cross-section of the fan scene and thus to reach them. There are members of our initiative who have been with us since Hertha’s first Bundesliga game in the Olympic Stadium, others have only found their home with Hertha in the last 10 years.

“OUR CLEAR FOCUS IS ON MAKING THIS STADIUM POSSIBLE AND FINDING AND REALIZING A SUITABLE LOCATION.”

Our initiative consists of 15 members. In order to be able to work effectively and to keep decision-making processes short, the core should not be much larger. This does not mean, however, that we are not open to all suggestions. Active participation like in a fan club or similar is not possible with us. We are not a fan club, but an initiative – we organize ourselves in a small circle and represent the interests of numerous Herthans.

Since our founding, we have met with a number of politicians and personalities from Berlin’s sports scene, visited countless events and held discussions; we have dealt with location analyses, feasibility studies and much more – it would be hard to pick up and actively involve someone who is not involved in the topic. However, we are grateful for any other form of support, for example by establishing contacts. Because one thing we have learned in the last few months – open, constructive and reflective discussions at eye level are extremely important.

Where do you stand with the initiative today? What are the next steps that are planned?

Sixteen months after the founding of our initiative, we are all of course smarter together when it comes to monument protection, noise emissions, environmental regulations, and much more. As I mentioned earlier, we have had many discussions, especially with members of the Berlin Senate. We networked, had physical and digital conversations and did a lot of persuasion. And we have succeeded in bringing together the key players from politics, sports and clubs. At the first round table, the first thing we did was to sound out the individual positions and a possible common intersection.

The round table is first of all the prerequisite for finding a solution for a location within the borders of Berlin, namely the most economically sensible location for a stadium of one’s own. The Round Table will continue in November. We cannot yet estimate how many meetings will be necessary for this, but we are Hertha residents and have learned one thing over the past 128 years: to stay on the ball.

“ALL IN ALL, WE ARE ON THE RIGHT TRACK.”

Our clear focus is on making this stadium possible and finding and realizing a suitable location. But it is also clear that we will not withdraw from one day to the next, but will of course continue to support this project.

How do you feel about the exchange with the representatives of the Berlin Senate so far?

Because of the many conversations we had, we talked to representatives of the Senate Department for Sports, as well as several politicians from the House of Representatives and state politics. During the conversations we heard their views on the subject of stadiums, had the opportunity to clear up misunderstandings or ignorance and also to explain the reasons for their desire for their own stadium. Some representatives surprised us, especially in a positive way, other discussions were not so constructive. But, as I said, we are staying on and on the ball.

In your estimation – when will Hertha play in a pure soccer stadium?

The members of our initiative are at different stages of their lives. And no matter how old or young each one of us is – we all hope that we will experience a stadium of our own. No, we won’t make the mistake of putting pressure on them by naming a date. All in all, we are on a good path. 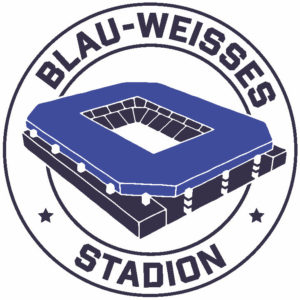 The logo of the initiative: At the heart of the graphic is the longed-for pure football stadium for the Berlin Bundesliga club Hertha BSC (© Graphic: Initiative Blau-Weißes Stadion) 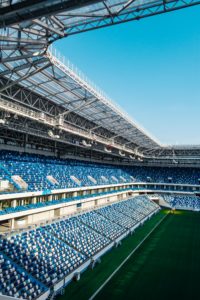 The dream of many Hertha fans: a pure football stadium without a running track – with stands directly at the edge of the pitch (example image) 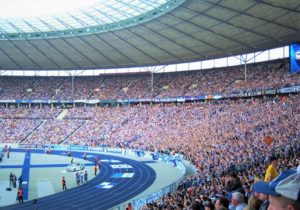 The status quo: Hertha fans in Berlin’s Olympic Stadium (before the Corona pandemic). Architecturally, the arena, in use since 1965, is impressive, but the athletics track is a thorn in the side of many stadium visitors.

MORE ARTICLES ABOUT THE OLYMPIASTADION BERLIN CAN BE FOUND HERE.

THE OFFICIAL WEBSITE OF THE INITIATIVE CAN BE FOUND HERE.