Interview: Roland Stolte on the planned “House of One”

At Petriplatz, in the historic center of Berlin, one of the most innovative and ambitious projects in Europe, perhaps even worldwide, is being developed. The building called “House of One” is to be built on the medieval site where Berlin was founded.

The “House of One” is to be the first sacred building in which Jews, Christians and Muslims can practice their religion united under one roof.

We had the opportunity to talk to Roland Stolte about the upcoming project. Stolte is chairman of the administrative board, head of content and concept.

URBAN DEVELOPMENT: Dear Mr. Stolte, first of all thank you for taking the time to talk to us about this exciting project. To begin with, we would like to know when the idea of a “House of One” first came up.

Roland Stolte: When the archaeological excavations on Petriplatz began in 2007 and the uncovered foundations of the Petri Churches and the neighboring Latin school opened up views into the early medieval period of Berlin, the question of what should happen to this urbanistically so distinctive place took on a new and unique dynamic. The local – quasi responsible – parish, which after the demolition of the last Petri church in 1962 to 1964 had to move to a community center on Spittelmarkt, had never completely abandoned the idea of being able to return to the original Petri church location at some point. Now, starting in 2008/09, this question arose in a new and serious way in the course of the beginning replanning of the state of Berlin for this area.
The church community began to consider how to respond to the symbolism and urban historical relevance of Berlin’s medieval founding site by returning to this square in such a way that other religions and society would be “given” equal space under one roof. In other words, not a church building as a representative gesture in the sense of: “Look, the church still exists”, but rather the attempt to create a place of lived tolerance in the midst of secular Berlin using the forms of a typologically new architectural language and an integrative concept that emanates from the religions themselves. From religions that share the urban space, i.e. that each relinquish power in order to jointly assume responsibility in the middle of our society for the so pressing questions of our time.

To whom can the idea be traced back in concrete terms?

The impetus came from the Protestant parish of St. Peter and St. Mary (“St. Petri-St.Marien”). I think it was, in a wise way, really only the first impulse. It was followed by the immediate creation of a working structure (in the legal form of an association), which would give the Jewish, Muslim and secular partners equal rights in the leadership of the planning process. Thus an interreligious-social core team was created, which for almost ten years now has confidently ventured into new territory, advised by many experts from architecture, science and culture and supported by supporters from over sixty countries.

“TWO THIRDS OF THE 47 MILLION EURO CONSTRUCTION SUM IS FINANCED BY GRANTS FROM THE FEDERAL AND STATE GOVERNMENTS AND PRIVATE DONATIONS.” 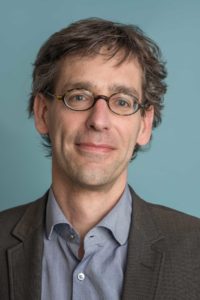 In the meantime, you have received a great deal of support from politics, business, but also from many private interested parties. What is the current project status, from a purely financial point of view?

Two-thirds of the construction sum of 47 million euros is financed by grants from the federal government, the state and private donations. After the deep foundation of the building, the first construction measure, was already carried out in the fall of 2019, construction work is scheduled to begin in the first quarter of 2021 – for a structurally sophisticated building, which with its largely uninsulated, 94 centimeter thick solid brick masonry ties in with the old building traditions of the religions and will represent its own model of sustainable construction.

What do we find today when you visit the construction site of the “House of One”? When do you expect the entire sacred building to be completed?

At the moment, a sample façade built on Petriplatz, in conjunction with a small exhibition, provides information on the basic idea behind the House of One project and a first impression of the dimensions of the brickwork and the materiality. The building is currently under construction on our neighboring construction site, where the State of Berlin is erecting the ‘Archaeological House at Petriplatz’. We expect a construction period of about four years.

“RELIGIONS THAT SHARE THE URBAN SPACE, THAT IS TO SAY, THAT GIVE UP POWER IN ORDER TO TAKE JOINT RESPONSIBILITY (…).”

The building is being constructed on a historically exposed site in Berlin. The Petrikirche, built in 1230, rebuilt several times and demolished in 1964, once stood on this site. There were also voices that brought into play a reconstruction of the church. How will the history of this place be remembered in the future building?

The past of the square and thus the past of the Petrikirche play a central role in the concept of the House of One. This is made very obvious by the fact that the foundations of the last, neo-Gothic Petri church will be part of the House of One as an archaeological hall, not as a museum area, but rather integrated into the work and concept of the House of One as a house of prayer and teaching. Particularly with regard to the coexistence of religions in the history of Berlin, the history of the Provostry of St. Peter’s provides illuminating and impressive retrospectives, its own little story of promise and guilt, which must be brought to mind.

Dear Mr. Stolte, we thank you for the interview and wish you good luck for this extraordinary project. 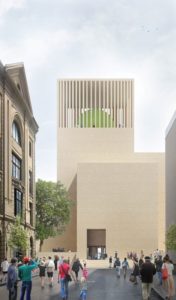 Visualisation of the exterior view of the future building. 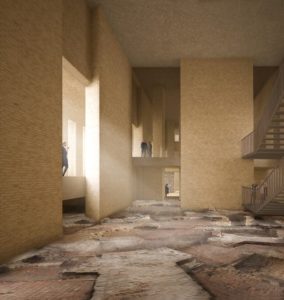 Inside, the remaining structures of the historic Petri churches are brought to life. 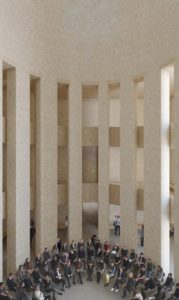 Donations for the project can be made here.