Oliver Schruoffeneger, born in Berlin in 1962, has been working in the district of Charlottenburg-Wilmersdorf as District Councillor for Urban Development, Building and Environment since November 2016.

He has been a member of the Bündnis 90/Die Grünen party since 1978. We had the pleasure to talk to Oliver Schruoffeneger about his work as District Councillor for Urban Development, Building and Environment.

URBAN DEVELOPMENT: First a question about your personal background: How did you come to this activity and how long have you been carrying it out? If it is okay for you, let us briefly share what you did professionally before this activity. Where did you originally come from?

Oliver Schruoffeneger: I was born in Berlin and also studied political science here. During my 16 years in the Green District Parliamentary Group in Reinickendorf, I also worked there as a group manager and later as a consultant for budgetary and financial policy for Bündnis90/Die Grünen Fraktion in the Chamber of Deputies. In 2001, I was elected to the Chamber of Deputies myself and worked there as the group’s spokesperson for budget, personnel and development policy. There I was always responsible for the personnel policy of the country and the areas of construction, housing, urban development, transport and environment.

At the same time, I was a volunteer on the board of the Paritätischer Wohlfahrtsverband for 15 years, as I consider grounding outside of politics to be important. As the managing director of my own small GmbH, I organized various exchange projects in the Berlin-Windhoek city partnership from 2006 onwards, and between 2015 and 2018 I did the same for projects with Ukrainian NGOs.

Since May 2016 I am a city councilor in Charlottenburg-Wilmersdorf. After a few months in charge of the youth and school sector, I took over the department of urban development, construction and environment in November 2016, which I still lead.

“The biggest challenge is certainly the permanent balancing act between the many people who are afraid of the many uncertainties and who want to maintain the status quo.”

How can we imagine a “typical” working day as district councilor for urban development? Are there things that are repeated regularly, or is every day a “new adventure”?

Work is actually always an adventure. Every day new projects arise that need to be discussed. But of course there is also the normal daily business. The administration has to run, the budget has to be managed and the regular district, faction and committee meetings tie up a lot of time. I try to organize it in such a way that the day-to-day business does not eat me up and I reserve at least 30% of my working time for independent priorities and projects. The working day usually begins at around 8:30 a.m. and by the end of the week I usually have 70 hours behind me.

That sounds awful, but on the other hand there is a high level of job satisfaction and part of the work, like this interview, I can do at home in the sun. The only thing that gets on my nerves are the four or five evening appointments per week, which cannot be avoided.

Especially for the area around Hardenbergplatz and Kurfürstendamm, there is a desire from various sides for more high-rise buildings. These plans are controversially discussed. What do you think about these plans?

I didn’t find the debate about the high-rise buildings very exciting from the very beginning. The crucial question for the next 25 years is how we will manage the conversion to a sustainable, climate-neutral city. In 30 years, cities will look and function completely differently than they do today. Other forms and systems of mobility, online commerce will completely change the way we use our first floor zones, new building materials, demographic developments, more homeworking, and so on. What role will the city centers then play and how can we ensure their attractiveness in the long term? We have to answer these questions, and only then will we know whether a concrete high-rise project can contribute to this.

In City West, we are endeavoring to at least systematically address these questions and, fortunately, potential developers are getting involved in the process. I made it clear from the outset that I do not consider individual high-rise projects to be approvable if they do not also provide answers to the various questions about the future. Unfortunately, the discussion about high-rise buildings in the city as a whole has so far been too much reduced to purely urban planning issues and all those involved are stuck in their old basic positions of the 1980s. But this does not make the city fit for the future.

The interim status of our discussion process can be found here.

What are some of the biggest challenges you have to overcome in your work as a city councilor for building?

The biggest challenge is certainly the permanent balancing act between the many people who are afraid of the many uncertainties and who want to maintain the status quo. This starts with the issue of “taking back parking spaces” in one’s own street and, of course, extends to all construction projects, large and small. And what is really difficult: Our society is more and more divided and everybody sees only his own interests. It is hardly possible to gain acceptance for the process of weighing up interests and to communicate that politics must always include a balance of interests in addition to the implementation of one’s own political goals.

“What role will the city centers play in the future and how can we ensure their attractiveness in the long term? We have to answer these questions, and only then will we know whether a concrete high-rise project can contribute to this.”

And finally: there are certainly projects to whose successful implementation you have been able to contribute significantly. Can you highlight a project of which you are particularly proud or of which you can look back with particular satisfaction?

Unfortunately, after four years, there are no successful projects in the field of urban planning and construction that are really finished. I have initiated quite a number of projects and if the voters want me to, I might be able to look back on some completed things at the end of the next legislative period.

I would be particularly satisfied if the Mierendorffrundweg was finished then. Here we want to develop the shore strip around the Mierendorff Island with its then approx. 22,000 inhabitants into a 5.2 kilometer long cultural and movement path, which will be an attractive green area for the island’s inhabitants. This would be the lighthouse project for a much greater significance of public spaces. I believe that the quality of life in the city center will depend to a large extent on how we deal with our public spaces and whether we manage to create varied qualities of stay here across the board, which are not only spaces for rest and retreat, but also offer attractions and activity areas.

The second topic that moves me a lot is the following. The neighborhood around Steinplatz, from Yva-Bogen to Ernst-Reuter-Platz, has hardly been perceived as a special neighborhood so far. But what other quarter of the city can offer so many important and interesting institutions: Two universities, the Landeszentrale für Politische Bildung, the CO-Galerie, the Newton Galerie, a cinema that has just been voted Germany’s best cinema, the IHK, a large start-up house and much more. To network all these institutions and make them visible in the neighborhood, with Steinplatz as a public center and forum for the exchange and discussion of common themes, that would be something I would really like. We have started, but the networking that is indispensable for this will take some time.

And with that comes the third hope. I would still like to succeed in turning urban planning, which is essentially concerned with questions of building law and planning law, into a real urban development department that considers all aspects, and thus the transformation of the city into a sustainable, social and climate-neutral city of the future.

Dear Mr. Schruoffeneger, we thank you for your time and the detailed discussion. 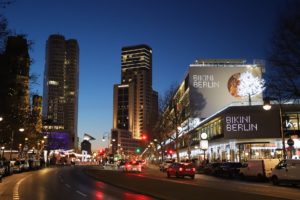 “Zoofenster”, “Upper West” and the rejuvenated “Bikini Haus”: the modern face of the changing “City West” in the heart of Charlottenburg Wilmersdorf 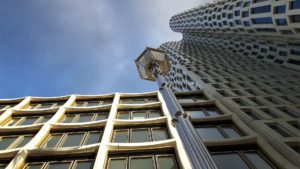 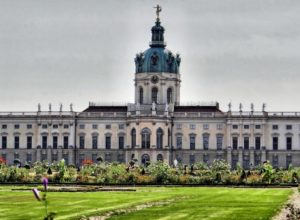 Historic landmark in the west of the district: Charlottenburg Palace.

Re-use of Tegel Airport: Constanze Döll in an interview

Peter Deluse as a guest on the URBAN DEVELOPMENT PODCAST