Already in February of this year we reported on the future use of the area where the Anhalter Bahnhof, which was heavily destroyed during the war and demolished in the 1960s, once stood. According to the current state of planning, however, there will be no reconstruction of the historical building on this site, but rather the construction of a new Exile Museum, which has been planned for several years.

We had the opportunity to conduct an interview with Meike-Marie Thiele. She is managing director of the Stiftung Exilmuseum Berlin and has been working for the project since January 2019. 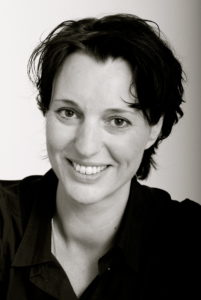 URBAN DEVELOPMENT: Dear Mrs. Thiele, thank you very much for taking the time for us. To start the conversation, I would first like to know which group or team is behind the Exile Museum Berlin project.

Meike-Marie Thiele: The project is backed by the Stiftung Exilmuseum Berlin, which was founded in 2018 as a civic initiative. It was created around our patrons, the Nobel Prize winner Herta Müller, who in an open letter to the German Chancellor and the former German President Joachim Gauck, suggested the idea of an exile museum. Also a part of the team is the art dealer and co-founder of Villa Grisebach, Bernd Schultz. We were able to win Prof. Dr. Christoph Stölzl as founding director. We also have a circle of very committed founders and benefactors who are driving the project forward.

How and when did the idea for this project come about?

Actually, it all began with a photo book by Stefan Moses about German emigrants. This book with texts by Christoph Stölzl fascinated Bernd Schultz so much that the idea arose to dedicate a museum of his own to the subject of exile. There are many museums and memorials to the Holocaust, but hardly any places where people are remembered who had to flee and lost their homes, often their loved ones, their language, their professions. Today, flight and migration is an omnipresent topic and many people seek refuge in Germany. So it is natural to look at the part of history in which people were driven out of Germany and scattered all over the world.

“TODAY FLIGHT AND MIGRATION IS AN OMNIPRESENT TOPIC (…). SO IT SUGGESTS ITSELF TO DEAL WITH THE PART OF HISTORY IN WHICH PEOPLE WERE DRIVEN OUT OF GERMANY AND SCATTERED ALL OVER THE WORLD.”

What will there be to see and experience in the Exile Museum? What will be the key points of future exhibitions, and what will not be on display?

The museum focuses on those people who had to flee from the National Socialists and were able to find safety abroad. In addition to the historical facts and contexts, many individual biographies are presented and the intricate, tragic and surprising lives of the exiles are traced. The museum will concentrate less on exhibiting objects and more on media and scenography. In this way, a close-up view of the subject is to be created and the history of exile made directly tangible. In addition, a bridge to the present will be built again and again and possible constants in the human experience that life far away from home brings with it will be searched for.

In addition, there will be a generous area for temporary exhibitions. There, the many institutions already collecting and researching on the subject of exile will be offered a “showcase” in the capital to show their own or jointly conceived exhibitions. Also conceivable, however, are art exhibitions by contemporary exile artists and much more – the subject offers endless possibilities.

The architectural competition for a new museum building is currently underway. What is the concrete timetable of the project until the opening of the museum?

The measures against the consequences of the Covid19 virus have also upset a lot of things for us. The jury for the competition should have met in April, and the exhibition of the competition designs would have started on 12 May in the State Library on Potsdamer Platz. We will now have to look for new dates for this. The current dates will then be announced on our homepage and in the newsletter. However, we are still assuming that the exhibition will open in 2025.

How is the project financed?

Thanks to the first generous donations, we were able to start work immediately. Bernd Schultz has sold a large part of his private art collection, and the proceeds have enabled us to set up the foundation office with permanent academic staff and to initiate many things. We are continuing to collect donations for the construction of the museum and the equipment of the exhibition.

The new museum building is to be constructed on the site of the former Anhalter Bahnhof. Why was this location chosen?

The location is virtually ideal for the Exile Museum. Firstly, it is very centrally located in Berlin and in a neighbourhood of cultural institutions dealing with related topics. The Exile Museum could therefore very usefully complement the museum landscape in this part of the city. On the other hand, Anhalter Bahnhof is indeed a historical place for the topic of exile, because thousands of people set out from this station in the 1930s to leave the country. Of course, it also represents the fate of all those who were unable to escape, because deportation trains departed from Anhalter Bahnhof soon after. Moreover, the ruins of the station portal symbolize the transitory state of exile, the break in life, the departure.

“THE EXILe MUSEUM COULD VERY USEFULLY COMPLEMENT THE MUSEUM LANDSCAPE IN THIS PART OF THE CITY. ON THE OTHER HAND, THE ANHALTER bahnhof IS INDEED A HISTORICAL PLACE FOR THE SUBJECT OF EXILE (…).”

One initiative calls for the reconstruction of Anhalter Bahnhof on a historical site, but with a new function. Is housing the Exile Museum in the shell of the historic Anhalter Bahnhof an option? The concept for the future Humboldt Forum will be similar.

The urban planning situation on Askanischer Platz is very complex, since the empty space left by the station has been filled in very small and sometimes incoherently. Nevertheless, facts were created that cannot be turned back so easily today. For example, the sports field created on the site is indispensable for the district and its residents, the Tempodrom has a firm place in the Berlin event landscape, a primary school is there and much more. In short, I don’t believe that a reconstruction will happen and I don’t believe that this reconstruction would make sense.

How do you collect content, exhibits and stories for the future museum? Is there a special team for this and are the preparations already underway?

Yes, for more than two years now three research assistants have been working together with the curator to fish those stories from the extensive scientific literature on the subject that are to be told in the museum. It is scouring all the relevant archives and, since the museum has a strong focus on media communication, it is above all also trying to raise photographic and video treasures. The team has already worked out a very comprehensive rough concept, which is now being further refined.

Mrs. Thiele, thank you for the interview. 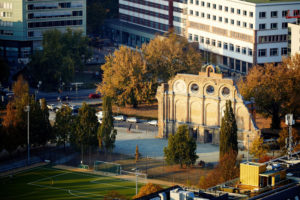 The Exilmuseum is to be built on this site: The ruins of the former Anhalter Bahnhof on Askanischer Platz in Berlin Kreuzberg. 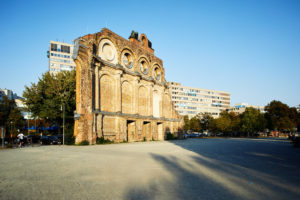 International press comments on the opening of the Humboldt Forum