The Future of Work: André Marx on the Axel Springer New Building

What is not taken for granted in Berlin, the media group Axel Springer SE has succeeded in doing with its new building on Zimmerstraße, designed by Rem Koolhaas: The budget and timeframe of the project were adhered to, and the move-in of the approximately 3,500 employees was carried out successively since spring 2020.

The building sets architectural standards in an era in which urban development concepts often seem to be drawn from a drawing board – far too often monotonous and interchangeable. Koolhaas, who beat 18 international architectural firms with his radical and unusual design in spring 2014, was present at the official handover of the keys on December 19, 2019, as was the media company’s CEO, Mathias Döpfner.

Koolhaas’ expansive building, which conveys completely different visual impressions on all four sides, is already one of the most frequently photographed buildings in the area around Rudi-Dutschke- and Axel-Springer-Strasse, which is traditionally characterized by commercial and office buildings and is of course home to many media companies.

We had the opportunity to talk to André Marx, Program Manager “Axel Springer Neubau”, about the project and his first experiences of everyday work in the new office building.

ENTWICKLUNGSSTADT: Dear Mr. Marx, first of all thank you very much for taking the time to answer our questions. Since the end of 2019 the new building of Axel Springer SE, which was constructed according to the plans of Rem Koolhaas, has been officially completed and since the beginning of 2020 more and more departments have gradually moved into the building. How would you describe the first few months in the new building, what experiences has the company had with working in this building, which is very conspicuous from the outside?

André Marx: Before we moved in, all tenants and the project team were filled with a mixture of curiosity, anticipation, excitement and perhaps also a touch of skepticism as to whether the concept and architecture would be realized, experienced and tangible in the building in their daily work. I would say: our concept has been a complete success. Even though our initial experiences are unfortunately closely linked to the Corona situation, you can see how our employees have accepted and are using the opportunities offered by the new building. The coworking area is very well taken up and our employees are taking advantage of the many, novel work opportunities. And numerous contacts are also being made between different Group companies, which have often worked independently of each other in the past. In the summer, the popularity of the roof terrace and the bar almost overwhelmed us – even though we naturally had to implement clear safety measures such as distance rules in view of Corona. And finally: I keep hearing how inspiring and motivating the building’s magnificent architecture is when you work in it.

A central point in the briefing for the architectural competition was that the building should rethink and redefine what collaboration and the future office for a digital company looks like. “Transparency” and “Collaboration” were crucial to the concept. We want to encourage more exchange of knowledge and ideas between our units and make more visible who is working on what.

The architectural response to this is a basic structure of the building in the form of a “valley” with a distinctive diagonal axis, which incidentally also symbolically traces the former border between East and West Berlin. Receding terraces up to the 5th floor form the two sides of this valley.
As a result, many office spaces and workplaces are located on terraces. After a great deal of initial skepticism, we are now receiving a great deal of positive feedback from employees about these work spaces. We have introduced a new and progressive work form concept with a flex-desk model on the work areas, which are predominantly designed as open-plan spaces. As a result, there is no longer a personally assigned workstation, but instead you can choose any desk within the “team homes”. Or you can go to the 2,000 square meter coworking area.

“”TRANSPARENCY” AND “COLLABORATION” WERE DECISIVE FOR THE CONCEPT. WE WANT MORE EXCHANGE OF KNOWLEDGE AND IDEAS (…).”

We have also created a large number of so-called “work opportunities” and have reduced the number of standard desks in return. This means that there is a lot of furniture that invites consultation, smaller meetings, informal exchange, in short: collaboration. This makes our office landscapes more attractive and inviting. We are convinced that we make better use of our space than by filling it with white standard desks.

What do you personally like best about the new building?

There is a lot to name. On the one hand, the enormous, 45-meter-high atrium with its great spatial impression and constantly new, surprising perspectives and lines of sight. And on the other hand, the roof landscape with gastronomy, urban gardening and numerous opportunities for recreation and relaxation. We plan to make these accessible to a controlled public in the future, once the Corona pandemic is behind us.

Extensive road works can still be seen around the building. What is still being done there and by when will this construction work be completed?

The surrounding streets will be given a new pavement and the sidewalks surrounding the building will be redesigned. Construction is scheduled to be completed in the first quarter of 2021.

Like every company, Axel Springer was also affected by the effects of the corona pandemic. To what extent did this particular situation influence the move to the building?

The moves to the new building began in April 2020, in the middle of the first wave of the pandemic. At the same time, a large part of the furniture was delivered and work was still being carried out on the interior. Nevertheless, we were essentially able to keep to the schedule – which was mainly due to the good cooperation between the construction team, suppliers and service providers, for which we are still very grateful. Since our employees moved into the new building and started work, the effects of Corona have been more noticeable. In order to protect the health of our employees, we at Axel Springer have established clear attendance and mobile office rules. Currently, for example, a maximum of up to 20 percent of the employees in the office should be present at any one time. This means that many areas are still very empty, and we are already looking forward to normal operations with “full staffing”.

Dear Mr. Marx, thank you for the interview. 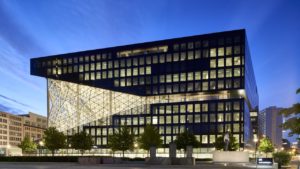 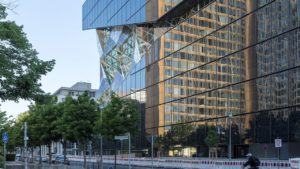 The former inner-German border runs through the new building. The building is partly in (Friedrichshain-)Kreuzberg, partly in Mitte. 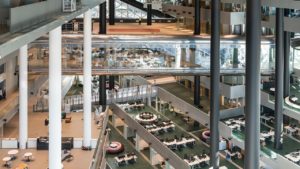 The plot on which the new building was constructed is 10,000 square metres in total. 9,100 of these have been built on.

A total of 52,000 square metres of office space has been created. This is spread over a total of 13 floors, two of which are underground. However, office workplaces have only been created on the top nine floors. 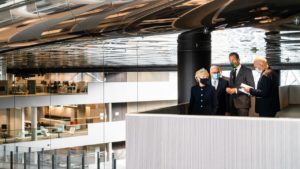 OUR ARTICLE ABOUT THE AXEL SPRINGER NEW BUILDING FROM JANUARY 2020 CAN BE FOUND HERE.

MORE INTERVIEWS ABOUT URBAN DEVELOPMENT CAN BE FOUND HERE.