Re-use of Tegel Airport: Constanze Döll in an interview

Six months after the opening of BER Airport in Schönefeld, Tegel Airport will be closed for good. According to current planning, the airport site in the north of Berlin will become one of the largest urban development projects since reunification, starting in May 2021.

In the following years, a research and industrial park for urban technologies (“Berlin TXL – The Urban Tech Republic”) and a new residential area (“Schumacher Quartier”) are to be built on the site. In addition, a landscape area of about 200 hectares will be created. The Berlin Senate has commissioned Tegel Projekt GmbH to develop, supervise and coordinate this urban development project.

We had the opportunity to talk to Constanze Döll, press spokeswoman of Tegel Projekt GmbH, about the very concrete implementation of this visionary and large-scale urban development project and to sound out with her where the differences to the subsequent use of the airport site in Tempelhof lie.

URBAN DEVELOPMENT: Dear Ms. Döll, first of all, thank you very much for taking the time to answer our questions. We already reported on October 12th on the project plan to build a research, science and work campus on the Tegel Airport site on the one hand and a residential area on the other.
The first of our questions looks back rather than forward: When were the first considerations for such a subsequent use of the airport site?

Constanze Döll: The first location conference for the Tegel region of the future took place in 2008. In a multi-stage process, the foundations for implementing the so-called “Research and Industrial Park for Future Technologies” were worked out. After an initially open-ended search for the right subsequent use, the master plan was finally presented in 2012 and the idea of the “Urban Tech Republic” could take shape.

The implementation of the project is directly linked to the opening of the BER, which went off the grid as planned on October 31, 2020 – with an eight-year delay. What effects did these delays have on the so-called “Berlin TXL” project, apart from the fact that you were in a forced waiting state?

We made good use of the time, refined our concepts and made progress with the planning. Planning of this size and complexity, as well as the creation of the corresponding planning law framework, is a process that takes several years, and we were able to continue working on it well “from a distance”. There were certainly difficult moments in all these delays. But the time gained has certainly been good for the project; this will be reflected in many details.

What will be the next steps once the move from Tegel Airport to Schoenefeld is complete?

The airport will have to move out before we can enter the grounds: The airport company will keep the airport operational for another six months – this is provided for under administrative law – and then possibly dismantle any security-relevant facilities. We expect to be able to take over between May and August 2021. The first steps will then be to secure the site, set up construction site logistics and build site roads, for example. And we will expand the range of information on site and open an information center. We have already begun sounding out contaminated sites and explosive ordnance; these will be removed if necessary before the first civil engineering work can begin in 2022.

“THE EDUCATION CAMPUS AND THE FIRST RESIDENTIAL BUILDINGS IN THE SCHUMACHER QUARTIER ARE EXPECTED TO BE COMPLETED BY 2027.”

Many observers believe that it is possible that the Tegel airport site could be in a similar condition to today’s “Tempelhofer Feld”, i.e. that the areas could be completely preserved in their current state without structural changes. Why will this not happen there?

Because long before the airport was closed, there was a clear political mandate for subsequent use, a consensually developed master plan and a broad-based participatory process. All of this was the basis for the utilization concept to be in place, the plans to be ready and we are only waiting for the official go-ahead to start the first phase of construction.

Is there a reliable estimate of the expected construction time for the three planned projects – the creation of the “Urban Tech Republic”, the development of the “Schumacher Quartier” and the creation of green spaces and parks?

We expect a realization period of about 20 to 30 years. The education campus and the first residential buildings in the Schumacher Quartier are expected to be completed by 2027; the last ones in the 2030s. The same applies to the neighborhood and landscape park. Construction work in the Urban Tech Republic will probably continue for another ten years, but may take less or more time, depending on the economic situation. The research and industrial location will never really be “finished” – it will develop in an agile manner and its face will also change constantly.

Dear Ms. Döll, we thank you for the interview and keep our fingers crossed for the implementation of the project.

YOU CAN FIND MORE INTERVIEWS HERE 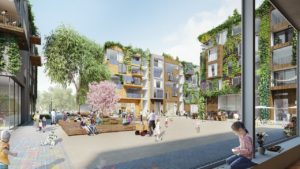 Future vision of living: Visualisation of the Schumacher Quarter. 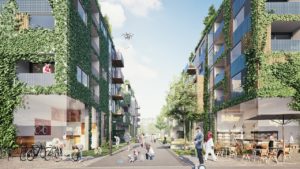 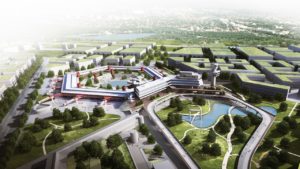 Future vision of research: Visualisation of the “Urban Tech Republic. 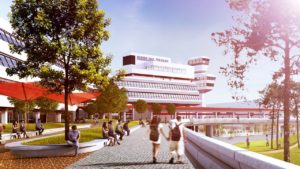