In the interview: architect Jan Kleihues

Jan Kleihues is one of the architects who decisively shaped the image of post-reunification Berlin. His best-known work is the new building for the Federal Intelligence Service in Berlin-Mitte. This project had a total cost of over one billion euros, making it the largest federal construction project to date.

Other well-known works by the architectural firm Kleihues + Kleihues in Berlin are the “Dorint Hotel” on Kurfürstendamm (formerly “Hotel Concorde”) and the Maritim Hotel on Stauffenbergstrasse. Another project is currently in the planning stage: the “Upbeat Berlin” is being built at Nordhafen according to plans by Kleihues + Kleihues.

We had the pleasure of talking to Jan Kleihues, founder of the architectural firm Kleihues + Kleihues, about the “Upbeat” building project and other projects in Berlin.

ENTWICKLUNGSSTADT: Dear Mr. Kleihues, thank you for giving us your time for a short interview. To begin the interview, we would like to know how you approached the conception of the “Upbeat” building. What were the intentions for the building that later won an award?

Jan Kleihues: The irony of the story is that on the site for the new building there was a kind of subcultural artists’ barracks called “Genius Loci.” That is exactly what interests us architects when designing a new building, the “Genuis Loci”, the special nature of the site, its physical nature as well as its spiritual, cultural and atmospheric aura and identity.

The building site forms the prelude to Europacity from the north; it lies between a railroad line to the west, Perleberger Strasse to the north, and Heidestrasse with Nordhafen behind it to the east. This means that the building is very exposed and should therefore not have any “backs”. The B-Plan is divided into three segments, each with its own height requirements.

“I BELIEVE THAT THE MOST DEDICATED CLIENT WILL ACHIEVE AS LITTLE WITH A BAD ARCHITECT AS THE BEST ARCHITECT WILL WITH AN IGNORANT CLIENT.”

In addition to the representational demands of the future users, the new building should also fully satisfy all functional aspects of a contemporary and sustainable office building (single- and multitenant). The idea of placing two buildings of different heights on the site is obvious, but is not compatible with the issue of space economy, flexibility, but above all not with the equality of space desired by the users. Two interconnected star-shaped building sections offer the greatest possible variations in use while minimizing the vertical access area. Thus, contiguous areas of up to 2,500 m² can be formed with only two development cores. The linked, star-shaped volumes create a building that can show itself from all sides, forms attractive spaces both along Heidestraße and towards the railroad line, and clearly defines the entrances.

The slender façade grid, a brick structure in front that lies over the building like a net, supports the fluid movement of the volume and allows a well-proportioned and, above all, hierarchy-free building to emerge on the outside, which always assigns a clear identity to the individual users in both multitenant and singletenant leasing. 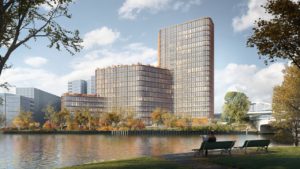 The future “upbeat” forms the northern prelude to the already well advanced “Europacity”, which is spreading and developing over an area of more than 60 hectares. Here, a completely new urban district is being created with comparatively few planning specifications. How do you assess the architectural implementation of the area and how has it affected the design of the “upbeat”?

On the positive side, almost all of the projects being developed there have emerged from competitions and there are already one or two remarkable buildings in this quarter, or there will be.

The “distance-oriented” B-Plan is problematic, and I am concerned that the area will lack the urban density and thus the liveliness that one would like to see in a “Europacity”. We did not see the complex height requirements of the B-Plan as a problem, but rather as an opportunity to develop the image of a powerful structure that, despite a calm, unagitated and timelessly objective architectural language, not only asserts itself as a self-confident solitaire in the urban context, but also emerges from it and thus becomes part of an ensemble – namely that of the “Europacity”. 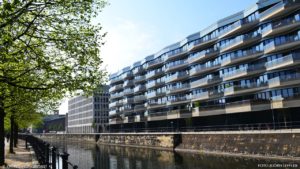 The “upbeat” is one of many projects that you have already implemented in Berlin. If you had to make a ranking of your personally most successful works in Berlin – which would be your three favorites, and why?

I am convinced that the ranking of the most successful projects is less important than the way to get there. For example, the former “Hotel Concorde” on Kurfürstendamm (the current “Dorint”) is one of my first major projects, which we developed together with the art collector and builder Hans Grothe. Always with the aim of achieving the best possible both economically and functionally, but above all architecturally, we discussed and argued a lot and hard – but on an equal footing.

The same applies to the new headquarters of the BND, where we discussed not only costs and deadlines but also architecture at the working level of the BBR. These are just two examples of some of our projects that have been successful and where you can see how important it is to work in partnership with the client to achieve the best possible result. I believe that the most committed client will achieve as little with a bad architect as the best architect will with an ignorant client.

“I WOULD LIKE TO SEE AN IDEOLOGY-FREE DISCUSSION ABOUT THE CAUTIOUS DEVELOPMENT OF TEMPELHOFER FELD.”

Certainly there have been architectural competitions in the past in which you did not emerge as the winner. This is an inevitable part of the architecture business. Give us an insight, if you like: Which project that you were unable to implement still annoys you the most today? Which design would you have liked to see realized?

There are only a few colleagues – including journalists, by the way – who understand why we only came second in two high-rise competitions in Frankfurt, for example. These were the high-rise on Güterplatz and the “Altes Polizeipräsidium” high-rise. Of course, we would have liked to have realized both projects. But as you say, that’s part of the architecture business.

But it’s really frustrating when you take part in an international competition, win it and then can’t build, even though the sponsor has put the competition out to tender and carried it out professionally, but then doesn’t even have the money for the planning. This is what we experienced two years ago with the “Revolution of Dignity Museum (Maidan Museum)” in Kiev, a great project in every respect, not only architecturally, but especially for the Maidan movement, the citizens of the city and those of Ukraine. We have not yet given up hope …

Is there a project or a plan that you absolutely still want to implement in Berlin, or in other words: in your view, is there anything that the city is still missing architecturally?

Dear Mr. Kleihues, thank you for your time and we wish you a relaxing holiday season!

MORE INTERVIEWS AND OUR ENTWICKLUNGSSTADT PODCAST CAN BE FOUND ON THE INTERVIEW PAGE. 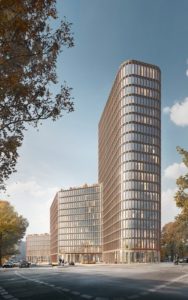 In planning: The “Upbeat Berlin” project at the northern head of the “Europacity”.